FiNdiNg OuR "New Normal" and the bLeSsiNgS along the way . . .

I started blogging here on November 17, 2011, 12 days after life as I had known it for almost 20 years was changed forever in the blink of an eye.

Since that time I have blogged about many of my feelings through this strange reality that became my life . . . becoming a “widow” (I STILL hate that word) at 45, becoming a suddenly single mom, struggling to know where I now fit in, in this world of couples.  I blogged about the “good”, the “bad” and sometimes the “ugly”.  After one post about the “good”, a comment was left that said, in part, that I was “only happy when things were going my way”.  Wow!  Really?  If you look back to the November 17, 2011 post that listed my husband’s obituary, I’d say that’s not really life “going my way”.  “My way” would have included at least 20 more years of living life together, at least 20 more years of seeing the grandchildren we had grow up, at least 20 more years together of seeing the girls graduate from high school, go to college, get married, have children, AT LEAST 20 more years of living with and loving my best friend.   However, even though life did not go “my way”, I CHOSE to trust what it says in Isaiah 55:8, “For My thoughts are not your thoughts,  neither are your ways My ways, saith the Lord” and stake my claim on God’s promises that nothing that ever touched my life was out of His control or out of His Divine plan.  Some days that knowledge helped, some days it didn’t.  Still I trusted.

As unbelievable as it seemed on November 17, 2011, life did move on, and in His timing, God did allow me to find love again, a new love, a new chapter in this book of my life.  Not a new book to replace the years, the love, the memories, the laughter, the AMAZING children or the life Rickey and I shared, just a new chapter in the big story called my life.  For, as hard as it was to accept that Rickey’s life on earth ended on November 5, 2011, mine did not, and God was and is still writing my story.

For those who may think that in moving on, I have forgotten, let me share a quick little story with you.  About a year ago, I blogged about how people tended to remember us on the big days; Christmas, Thanksgiving, Easter, birthdays, Tessa’s graduation . . . but that those days to me weren’t the hardest because I knew they were coming and I could prepare for them . . . I could mentally become strong before they arrived and therefore, I could stand strong and survive them.  It was the “little” days, the days that meant something to us, not others that hit the hardest . . . and still do.

This post has been a month in coming as I have processed my thoughts and feelings ... you see, the first weekend in August is the Waterfront Festival in town, a weekend that for us as a family was a "tradition" . . . one of those "little" days in the eyes of others, but a "BIG" day in my memories.  This year, as I drove to work on that Saturday night just after the fireworks ended, I was FLOODED with those memories and moments.  I remembered all the years of going to the fireworks at Waterfront on Saturday night.  We went even before the girls were born.  For years we met my friend Jayne, her husband, Clark, and their kids there.  One of the first years we went, Rickey and Kaylyn (Jayne’s daughter) snuggled up under a blanket eating caramel corn because she was scared of the fireworks, and by the end of the evening she was having a blast!  The tradition continued throughout the years, we always brought Kaylyn caramel corn when we went to the fireworks – even after she was grown up and married (Kaylyn even brought a box of Crunch 'n Munch to Rickey's funeral).  And then, life hit.  Jayne was diagnosed with cancer.  Our years of fireworks ended and unbelievably, Jayne died.  Way too soon.  Way too young.  Would Waterfront fireworks ever be the same without  her infectious laughter punctuating the beauty of the fireworks? (The answer to that question is no, they will never be the same, but I'll ALWAYS remember that infectious laugh!) . . .  We never dreamed that Rickey would follow so quickly after Jayne.  As I continued my ride into work, and reminisced, I saw the lawn chairs and blankets spread, staking claim to spectator’s spots for the parade to be held in the morning.  I remembered driving home from fireworks, doing the same, staking our claim, holding our spot, where we’d watch the parade, collect candy, and again, visit with Jayne and her family.  Oh, the memories . . . a “family tradition” that wasn’t like the Christmas /Thanksgiving/Easter tradition.  This was a tradition that was unknown to most people, yet a tradition to us.  Another part of life that no longer was and we could never get it back.  Not only is Jayne gone, but so is Rickey.  Both of them taken way too soon for those of us left behind.  Yes, those memories hit.  They hit when they are least expected, and sometimes, it’s like a tsunami.  One foot still somewhat in the past, the rest of me living the here and now.  It’s still a difficult dance, it’s still a tightrope of emotions.

August also brings not only Jayne's Birthday, but Rickey's as well . . . MORE MEMORIES to sift through, to try to reconcile with our new reality . . . memories of days gone past, birthday celebrations that will not come again . . . more walking on that tightrope of emotions.

So, yes, the memories still hit.  Sometimes fiercely.  Sometimes when least expected.  Sometimes out of the blue with no warning at all.  In those times, I’m so very thankful that God DID bless me with Rick.  Rick, who listens when I need to ramble on about the past.  Rick who totally gets that his love to me is such a blessing for the here and now, yet understands that my love for Rickey was also true and for always.  Before I met Rick, I was told by my sweet sister-in-law Rochet that it would take a special man to come into my life, for he would have to understand that unique dynamic in my life.  The fact that Rickey’s love for me and mine for him did not die on November 5, 2011, it just took on a new dimension.  I wasn’t sure what she meant at the time, and I wasn’t sure that there would be someone out there who could understand that dynamic but, Rick does!  He loves me and the girls and would do anything for us (his exact words when I asked him how much he loves the girls is that he would "take a bullet for them"),  yet he understands that Rickey did not leave us willfully to cause us pain.  He understands that our marriage, our life together on this earth did not end because of bitterness and anger as is often the case in divorce, rather that Rickey heard God calling his name, and he said, “Yes, Lord, I’m coming home”, here one moment, and opening his eyes in Paradise the next moment.  Rick understands that he’s the new chapter in this book, along this journey called life.  He not only understands the crazy dynamics of my life but he helps me to cherish the memories, as well as enjoying making new memories in this chapter.   My love for him does not diminish the love I shared with Rickey, it just makes the “where I am now” amazing!

Because of this, I have decided to start a new blog.  I will keep this one open, this place that I pray shares Rickey's legacy, and when I have thoughts and feelings and emotions that would be best addressed here, I will post here.

But, the things that happen in our new chapter need their own chapter.  This blog IS Rickey’s legacy, and should stay that way.  My new blog is {appropriately, I think} titled “Blessings for the Journey”  (if you click on the name, you will find it!) . . . a continuation of this blog, “Our Journey to a New Normal”.  For despite the heartache and difficulty, we ARE finding a "new normal" and we have seen the blessings that the Lord sends our way.  If you want, you can join us on this new leg of our journey, we’d love to have you come along!
at September 04, 2013 No comments:

I like fun shoes & what’s more fun than fun shoes ... how about f un shoes at a great price with fun shoelaces!  win.win.win! I... 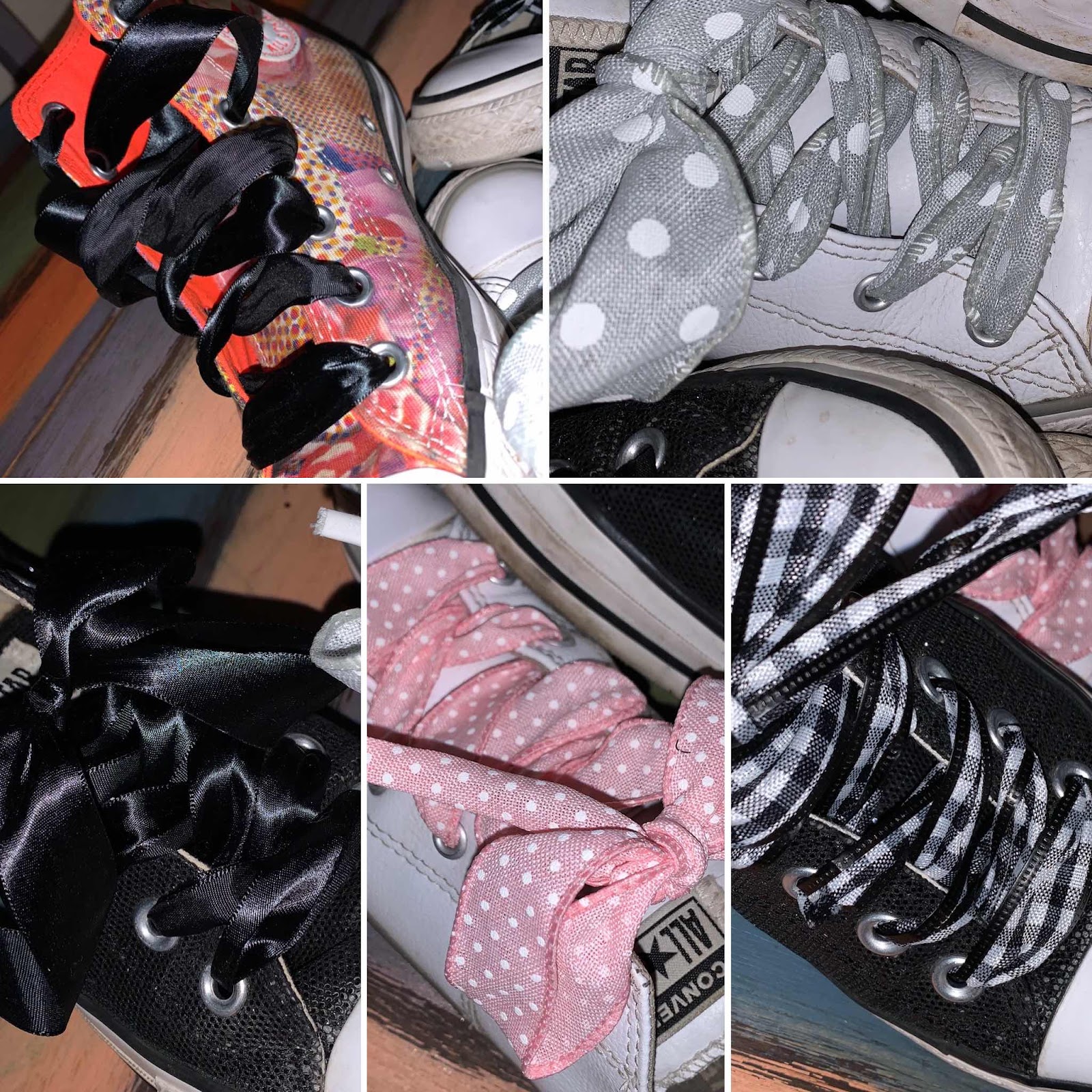